A surreal scene played out in New York City last week as diamonds literally rained on the diamond at Citi Field. Mets slugger Yoenis Cespedes snapped his diamond chain while legging out a bloop double in the first inning of Wednesday’s game against the Atlanta Braves. 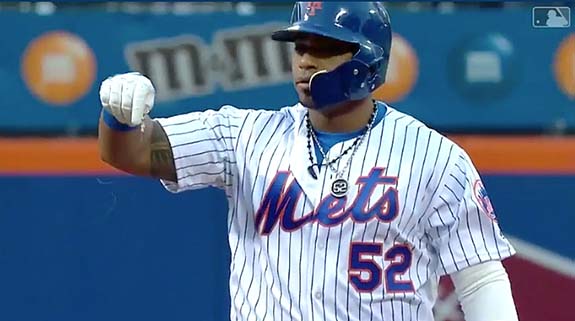 As Cespedes slid into second base, one of his necklaces seemed to get tangled with Braves second baseman Ozzie Albies, who jumped over Cespedes to receive the throw from the outfield. 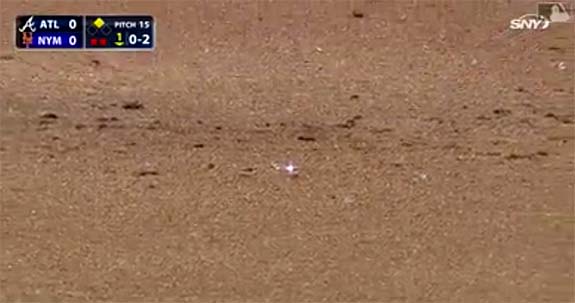 After the play, SNY cameras captured the twinkling of more than two dozen diamonds scattered around second base.

While stretching after the play, Cespedes discovered that his thin, white metal chain had broken and that most of the diamonds from that chain were now on the infield dirt. He held up what remained of his busted chain, stared at it for a moment and then threw it to the ground in frustration. 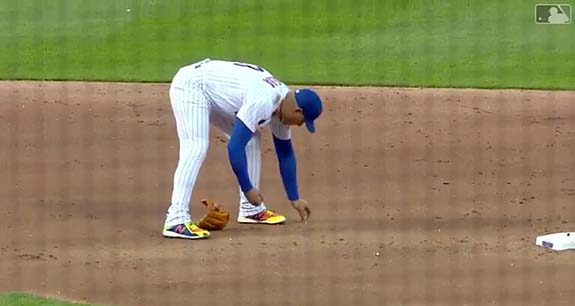 Between innings, Mets second baseman Asdrubal Cabrera and second base umpire Bill Welke picked up the pieces of the necklace.

“Well, the cleanup is underway after Yoenis Cespedes’s necklace exploded,” SNY play-by-play man Gary Cohen said. “Asdrubal Cabrera, who has done everything for this team this year, is now doing the housekeeping, as well.”

“They were around the base. I didn’t want somebody to slide on them,” Cabrera told the New York Daily News. “I just tried to get as many as I could. The umpire helped too.”

After the game, 25 diamonds sat in a styrofoam Gatorade cup in the Cuban-born slugger’s locker.

“I had that necklace for six years,” Cespedes told the Daily News. “Oh, well.”

According to the Washington Post, the “Official Baseball Rules” do not mention jewelry, and Major League Baseball does not otherwise restrict its usage. Players commonly wear chain necklaces or earrings for religious or stylistic reasons.

MLB’s Rule 1.11, which deals with uniforms, includes a clarification that states, “a pitcher’s person cannot include any unessential or distracting thing (including jewelry, adhesive tape, or a batting glove), especially on his arm, wrist, hand, or fingers.” MLB seems to maintain an unwritten policy, however, that jewelry on a pitcher is OK — unless the batter makes a specific complaint.

Cespedes is not the first Major Leaguer to have his chain explode during a game. Just last year, the black diamond chain of Houston pitcher Lance McCullers came apart during the American League Championship Series at Yankee Stadium. During a replay review, McCullers dug through the dirt on the pitcher’s mound to find the precious stones.