Music Friday: Vince Gill Proposes With a Pretty Diamond Ring in ‘Like My Daddy Did’

Welcome to Music Friday when we bring you romantic songs with jewelry, gemstones or precious metals in the title or lyrics. Today, 21-time Grammy winner Vince Gill buys a pretty diamond ring and proposes to the girl of his dreams in his 2016 release, “Like My Daddy Did.” 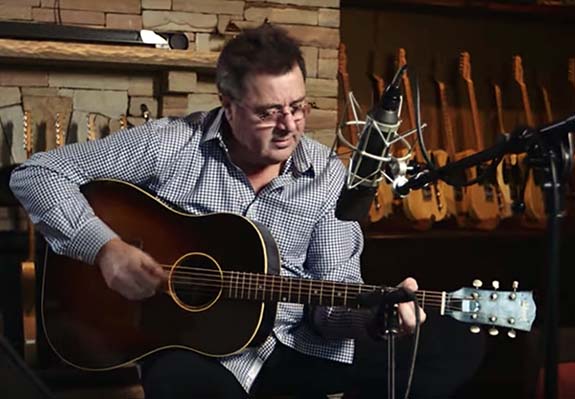 He sings, “I found a little girl and I fell in love / She shines brighter than the stars above / I bought her a pretty diamond ring / Asked her, if she would marry me.”

His girlfriend, however, is skeptical about making a lifelong commitment. Her hesitance stems from a fear that Gill might “treat her like her daddy did.” We learn that her dad left the family when she was just a little kid.

“He took off runnin’, I never saw his face again,” she says.

Gill consoles her: “There’s nothing you could tell me that would change a thing / I still want you to wear my ring.”

Ironically, Gill promises, “I’ll treat you like my daddy did.” Gill’s dad was loving and kind. When Gill was a kid, his dad took him fishing and never missed any of his ballgames.

“There ain’t no scars on this heart of mine,” he sings.

In the end, Gill’s girlfriend accepts the diamond ring and they get married.

In a promotional video about the song he penned, Gill said, “I love the yin and yang of the story, how he’s undaunted by her past. It’s sweet.”

“Like My Daddy Did” appeared as the fourth track of Down to My Last Bad Habit, Gill’s 14th studio album. Over the course of his 40-year career, the singer-songwriter and multi-instrumentalist has sold more than 26 million albums and placed more than 40 singles on the U.S. Billboard Hot Country Songs chart. He’s won 21 Grammy awards from 44 nominations and earned the 2,478th star of the Hollywood Walk of Fame in 2012.

Born in Norman, Okla., in 1957, Gill was inspired to pursue a music career by his dad, who was not only a lawyer and an administrative law judge, but also played part-time in a country music band. At the age of 10, Gill was already an accomplished guitarist. His love for instruments led him to learn how to play the mandolin, banjo and fiddle.

After graduating high school, he moved to Louisville to join the band Bluegrass Alliance. In the 1970s, he earned widespread fame as the frontman for the country rock band Pure Prairie League. Gill became a solo artist in 1983 and married “The Queen of Christian Pop” Amy Grant in 2000. More recently, he joined the Eagles on tour, singing lead vocals.

Please check out the video of Gill performing the acoustic version of “Like My Daddy Did.” The lyrics are below if you’d like to sing along…

“Like My Daddy Did”
Written and performed by Vince Gill.

I found a little girl and I fell in love
She shines brighter than the stars above
I bought her a pretty diamond ring
Asked her, if she would marry me

She said, will you treat me like my daddy did
Left me and momma, I was just a kid
He took off runnin’, I never saw his face again
So, when it comes to love, I ain’t the trustin’ kind
There’s a whole lotta scars on this heart of mine
I’m crazy about ya, I’m not sure I can

I’ll treat you just like my daddy did
He took me fishin’ when I was a kid
When I played ball, he never missed a game
When it comes to love, I’m the trusting kind
There ain’t no scars on this heart of mine
I’m crazy about ya, I’m pretty sure I can

Tomorrow morning is our wedding day
And all your fears are gonna fade away
Together we’re gonna build a bridge
No, I won’t treat ya like your daddy did
We’ll have the kind of love that’s the trusting kind
I’ll give you ever piece of this heart of mine
We were meant to be, I’m pretty sure we can